SPLASH! A beautiful boat ride to another boat that we would be living on for the next three days, is how November started, out in the stupendous Coral Sea off the coast of Cairns. Once on the Live Aboard Boat that we would be on for the next three days, we got a quick briefing and then ate some lunch. Lunch was followed by another briefing and talk to our instructor as we were diving in the historical Great Barrier Reef for our Advance Level Certification. The ocean water was flat, calm and pristine. It was now time for our first of many dives, it was to get back in the grove, and later on we did our first night dive. It was eerie to jump into darkness but there wasn’t any other choice. When in the water, it was so peaceful and tranquil; the night brings different life in the waters. On the dive there were reef sharks, a sleeping green turtle, shrimp, and jelly fish among many more animals. 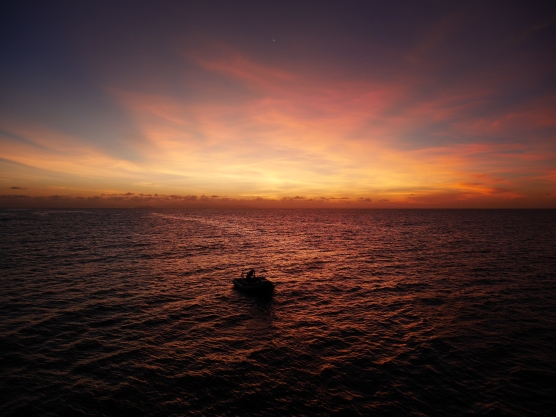 After each dive it’s a countdown to the next which was a sunrise dive the next morning. The fish and sea life wake up just as we do with the bright star lighting up the day. After a series of dives with an instructor, Ben and I were able to dive alone which led to us exploring without any limits. The Great Barrier Reef has coral as big as a car and others connecting that make it extraordinary. The connections make intricate crevasses and tunnels that test your breathing. As you have to control each breath because if not you rub against the sharp coral and hurt yourself, even more the coral. It was an experience of a lifetime. Go out there before we destroy it to the point of no return.
Upon returning to the mainland, we took a shower at the local Waterfront as showers don’t come often. A quick munch on some mangos as we still had two bags worth, then we cruised out of Cairns a couple of hours to figure out what to do next….. 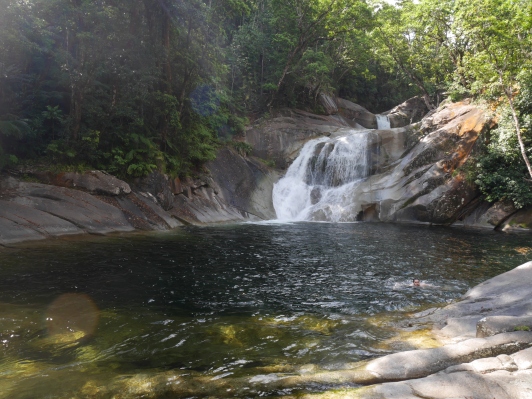 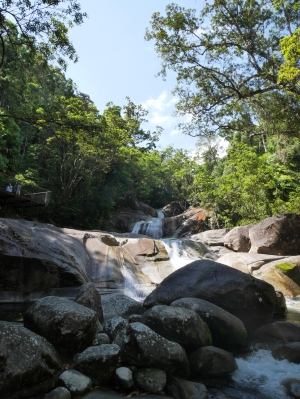 The next days were spent cruising down the coast, enjoying the spectacular views of mountains and sugar cane. Fun fact: Sugar Cane is grown in Australia and a lot of it, we saw it from Port Douglas and as far south as Brisbane. That’s a shit load of sugar cane. With that being said there were also many delicious vegetables growing as well. Every time we saw a stand off the highway we’d stop and buy random stuff. This led to our back seat being occupied by a surplus of fruits and vegetables. We even had a box for our munchies, often times we made driving our job from 8am until 5pm with random stops in between but hardly ever to make a proper lunch. Good Times and Great Munch. 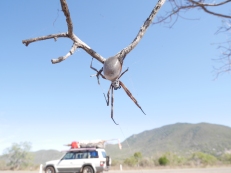 After stopping by many Waterfalls and Waterholes, we made it to the small town of Bowen. Our friend Magdalena was living there so we paid a visit and got recommended to this incredible beach that you can snorkel off. Horseshoe Bay, you just get your snorkeling gear and Alien Suit if you fear jelly fish, and swim a few minutes to the coral. The beach offers a lot of beautiful fish without the need of a boat taking you far out sea. 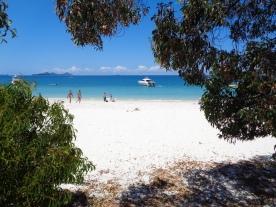 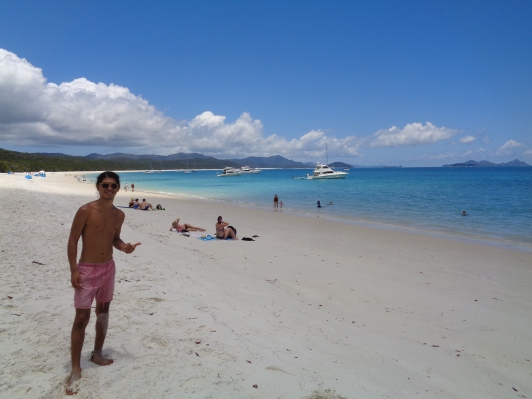 The next big stop was Airlie Beach, the gateway to the stupendous archipelago of Whitsundays. The town was small, beautiful and full of travel agencies. The first one was overwhelming and then went into a second, the lady made it easy to understand and we booked our day cruise. The morning started with talk of who will become president of the , as morning here was midday in back in the states. It was blue skies and finally made it to the popular Whitehaven Beach, the sand was very fine and bright. Looking at the sand was as looking at the sun, it even squeaked when you walked on it. That was just the beginning, the water so clear the boats looked as they were floating and you can open your eyes underwater. Later, we went snorkeling on the reef and tested our lungs with free diving. A beautiful day, full of many adventures and ended with the news that US got . What a shame. 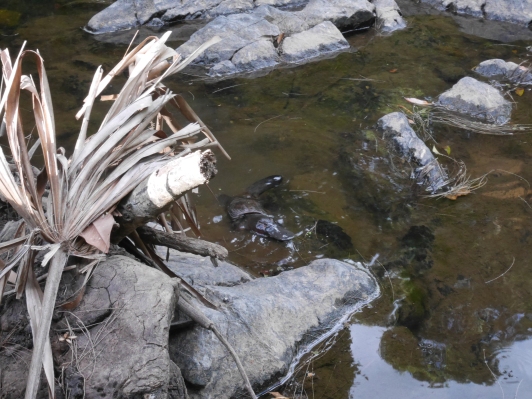 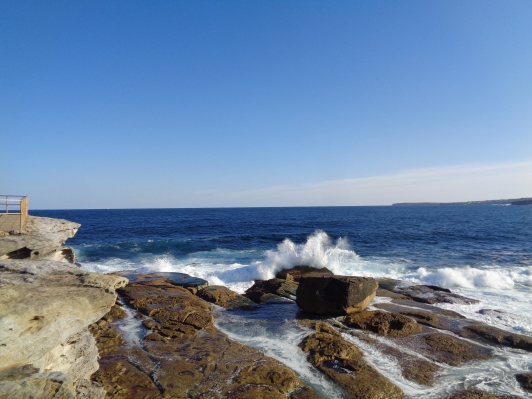 Ben stayed in Mackay and I time traveled to meet up with Egle a friend in Sydney. This was also the time of the “Super Moon”, which was shadowed by a sky of clouds. We spent time exploring Kings Cross, the Opera House and Bondi Beach. We even walked the Harbour Bridge a couple of times, did the walk from Bondi to Coogee. This walk offers nothing but incredible coastline views. While in Mackay, Ben witnessed a real life platypus and close view of the beautiful Rainbow Lorikeet.

Now back in Mackay for the night and off to our next adventure Fraser Island, the world’s largest sand island. We made it to Hervey Bay and booked three nights on Fraser Island. Once on the boat, we can hear the air getting released from all the cars. We weren’t sure what PSI to drop them to nor did we have something to measure them with. So, we simply released enough air to make them look similar to the other’s tires. It worked; we were on the island driving with no problem. The first hour or so is through a rain forest which makes you realize that the Earth is incredible place. How it is possible for these huge trees to grow in sand? I learned that Plants are incredible organisms, using the power of Photosynthesis to grow nearly everywhere.

One of the first stop was at the incredible Lake Mackenzie, a fresh water lake that again had this crystal clear water with incredibly fine sand. Soon after, we made it to the beach, driving there was fun and tricky. While looking for a sweet camp spot we got ourselves in boondoggle, so we dug out sand and put wood to build traction. A few attempts of this worked and drove to another spot. We cooked up some bomb nachos and set up the teepee with the alien beds, at the end of the night we both passed out in the teepee.

The next days we explored as much of the island as possible, even got ourselves stuck again. This time was worse; there was a trail of trucks behind us that rescued us. At one point our truck looked ready to flip over but the guys knew what they were doing and got us out of that mess. The next day at our campsite we did our first Photosynthesize Tacos setup, which was a success. People came and asked why we were giving free tacos, in return we got donations, drinks, even dessert. Soon it was back onto a ferry en route to the mainland. 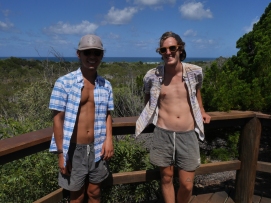 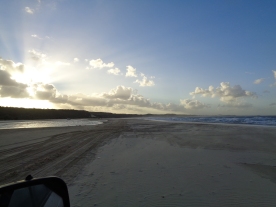 After the ferry, we pumped our tires back up and drove a couple of hours to a campsite. Everything had sand, our tent, the truck, clothes. It started a search for a car washing place, it was also Thanksgiving in a few days. It’s the day where you have to make a feast but we had no one to share with so we aimed to make it to Brisbane to meet a friend. The mangos were also finishing, luckily. There does come a moment when you have eaten to many mangos. We got to that point and began giving them out. The drive to Brisbane was through the beautiful coastal town of Noosa, many incredible beaches. It seemed very touristic and fancy, and then became overwhelming so we just drove through it. We explored it with our eyes while driving away. For our Thanksgiving we went out to eat at a Pizzeria in Bribie Island, bought some beers and drove to a campground.
Eventually, the highway turned to a speedway that made up the city of Brisbane. There was construction and many options of turning that led to us getting a bit lost. Soon we found our grove and met up with our friend Theresa at her job. The owner was in need of a chef so Ben worked there for a couple of days. While waiting for Theresa to finish, we decided to look up ferry tickets to Tasmania. All booked up, so gave them a ring and the lady found us space and now it was a countdown to Tasmania for December 17, 2016. Later, Theresa hooked it up with Mark, a great person and father of three awesome kids. Mark let us stay at his house for the next few days and we cooked food for the family. It was a bit strange living in a house again but felt great to be surrounded by a wonderful family. Mark took us on a cruise of the city and to the beach. While out one night with cousins of Mark they told us of the festival in Tasmania we heard about but didn’t know the name, Falls Festival. 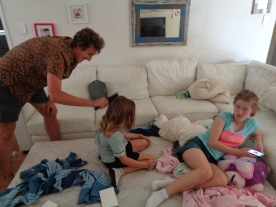 Soon it was Tuesday and happened to be my birthday, we drove out to the Tamborine Mountains. A beautiful wilderness, saw glow worms, tasted wine and most importantly had some Whiskey, as tradition for celebrations. The most exciting part was cooking mung bean burgers for the family. Mark tried the whiskey and gave me another bottle of whiskey as a gift. Later, Andy our cousin from Darwin came for a visit, it was great to see him. The next morning we applied as volunteers for the Falls Festival, used the last bit of internet and hit the road. The goal was to drive to Nimbin but only drove a few hours to Byron Bay and camped next to a fellow who finally tuned my banjo. The town of Byron was bursting with people everywhere; the town centre, neighborhoods, campsites, it was very strange. Later we will figure out why.

Junior and I did one week of eating only raw foods. We find that changing your diet can spark new ideas with cooking. With a raw diet, nothing can be heated past 35 degrees Celsius. Growing sprouts and beans is a method used within the raw diet. Also, drying out vegetables in the sun. I believe only the Australian sun will be good for this, and you will need a lot of patience. Here is a recipe we came up with while on the diet.

There is three parts to this recipe: The Sauce, the Spaghetti, and the Veg.

We have a peeler that creates these noodles. You can find them at almost any market in Australia, possibly the states too. There’s always an overenthusiastic guy shaving away at a pumpkin or carrot, launching noodles around like confetti. We got ours from an apartment we lived at in Melbourne. I think they cost around $20 or so. 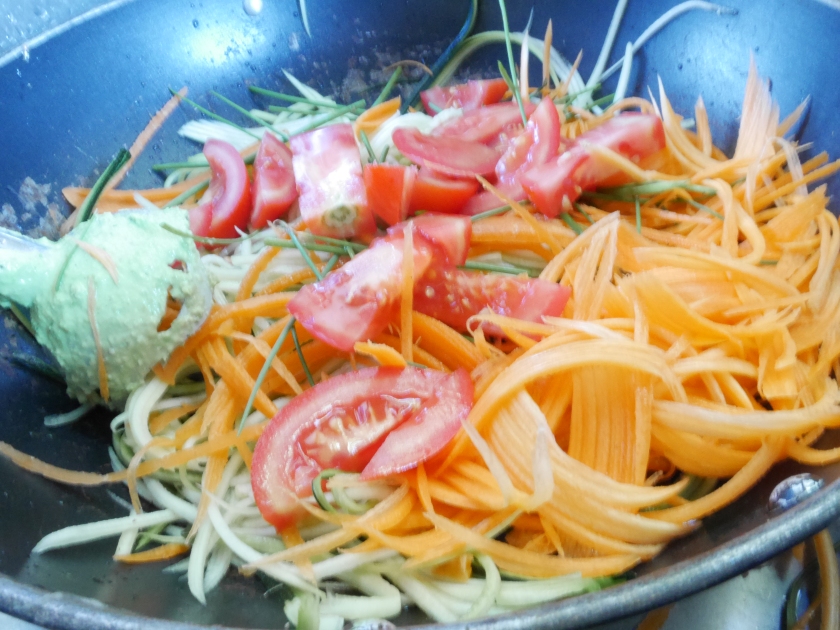 Throw in the Tasty Paste and mix that bad boy around. We used a wok because that was the closest thing to a bowl we had. 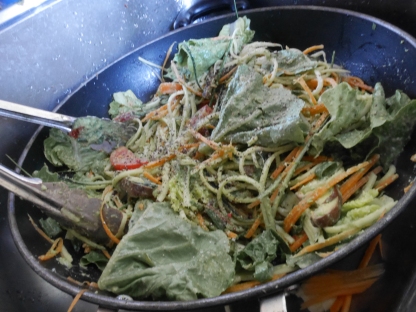 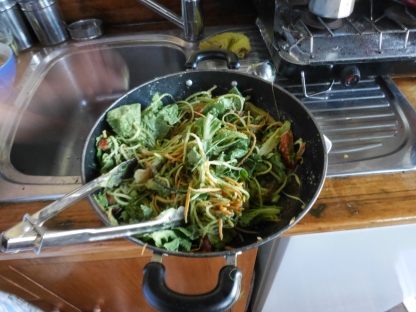